We woke up quite early and so had time to pack everything. Yes, we only were here for a little more than 24 hours, which I’m ashamed to admit. We did our best though to try to see as much as possible in this short time, you’ll read yourself, so I’ll just go ahead and go on.

After enjoying a very typical Italian breakfast (coffee and croissants;-)) we checked out and walked to the train station to leave our baggage there. The guy at the lockers wasn’t that nice, let’s put it this way… No, he was very unfriendly. But never mind that, he does have quite an awful job.

We started our visiting with the nearest church “Santa Maria Novella”. The entrance was between 5 and 7 € and when we’re at entrances right now, let me tell you, if you’re visiting Florence and are planning to do some visiting (which I recommend you should!!) go for the “Firenze Card”. We didn’t have it and really regretted it, since every entrance fee was fairly high.

Getting back to the church. There were frescos of the school of Ghirlandaio and of Ghirlandaio himself, who was the teacher of Michelangelo (I’m thinking/assuming/hoping you know who he is). The church has two cloisters, which are pretty, but compared to the other ones we saw are “only” quite nice.

We then wanted to take a look at the very very famous Dome of Florence. You could already see that this was a famous building (without taking a look at it-it really is gigantic!) since there were masses of people waiting or/and taking selfies. ( these selfie-sticks are sold at every corner and surprise surprise hardly anyone doesn’t have one- Just in case you’re wondering, I don’t have one). There was a huge line of people waiting to go into the dome and since we had a little bit time pressure, we asked how long they’ve been waiting. Turns out, for half an hour already!! We decided to take a close look at the outside, which is really very very beautiful and to skip the inside. Every travel guide says the dome is a little bit disappointing from the inside. I’ll just have to come again to see if that’s true;-)

Moving on, we needed a short coffee break (due to human nature). We chose a coffee shop about 150 meters away from the masses of people, meaning the dome. This is really a huge tip, if you want good food and/or coffee and don’t want to spend too much, go a little bit away from the tourists hotspots. We did so every time and ate very good while spending not so much money.

It started to rain and so we just went into a driveway to wait and eat a little bit of our grapes we bought the day before. Lucky were we, because when we took a look around, we noticed we weren’t in just any driveway, but in the entrance to the “Palazzo” of the Medici. The Medici were the princes of Florence, later dukes of Tuscany, known for their machiavellistic attitude. They ruled in the 15th and 16th century. Several members of the family were elected pope. The Medici were fans and supporters of art, that’s why they collected and well, supported anything that had to do with art, be it architecture or paintings or anything in between. Therefore we owe a lot of the things you can see and visit in Florence to the Medici. And lucky us, we got a tiny glimpse in their palaces’ court!

Our next stop was the Church “San Lorenzo”. We bought the “big” ticket, meaning we first had a look at the library of Michelangelo, which is very impressive. I’d like to study in a library like that if I could… Michelangelo himself drafted the building and now, one of their most famous treasured kept in there is the bible codex amiatina, which is from about 700 AD, one of the oldest books in the world. 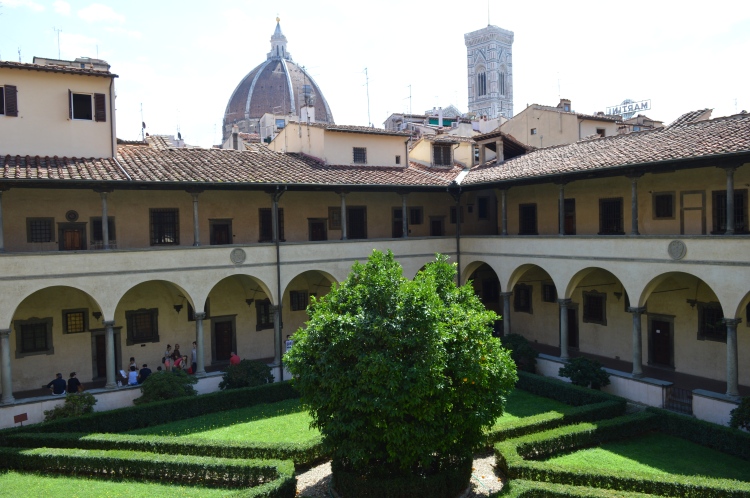 We also took a look at the museum, which wasn’t that spectacular. A grave of a Medici and of Donatello, a famous sculptor, ok this was pretty cool. We didn’t have enough time to look at the very precious liturgical objects, ok, ok, maybe not that bad.

Then we went into the church itself, where unfortunately the famous pulpit of Donatello was being restored at the moment, so we couldn’t see it. The rest of the church though is also definitely worth seeing.

After that, we went around the church and came across the chapel of “San Lorenzo”, we hesitated at first, but then decided to pay the entrance fee of 8€. And we did not regret it! On the contrary, we saw a gigantic    Room, if you can call it that, it was very impressive. In it there were four cenotaphs (gigantic tombs) of, of course, four famous Medici. Then a little way further in this building, we hardly missed it, there was the chapel of Michelangelo, with sculptures, so brilliantly done, I was amazed. The veins and the wrinkles so exactly caved into the stone, it was pure genius.

A while later we went to eat again at the “Piazza Santo Spirito”, this time at a restaurant/bar, well called pasta-bar “Tamaro”. I really recommend eating there. The food, especially of course the pasta ( since it is hand made right there for you to see) is very good, the service is great as well. The building itself used to be an automobile repair shop and the restaurant kept with that, working with modern art and graffiti, making it a very stylish place to eat.

With a satisfied stomach, we headed through the town to the “Palazzo vecchio”, which is the original town hall from the Middle Ages, also called the “signoria”. After all those cute and quiet streets, the place was again crowded with people.

We wanted to take a look at the baptisterie, which was also more or less a construction site. But it was only to be visited with the dome and for that we still would have to wait half an hour, so we went on through the town, heading for the “Santa Croce”.

We kind of got lost on the way, but somehow, always asking nice Italians, managed to get there. Santa Croce is a beautiful basilica, where quite a few famous people, including our beloved Michelangelo, Galileo Galilei and Rossini are buried and honored with huge cenotaphs. There is so much to see in and outside this gigantic building, I’d recommend staying here to a little longer.

Our next and last stop was the galleries “Uffizi”, where we had already booked our tickets online. There is obviously much to see there and therefore also very crowded and humid (which was very unexpected, due to the old and famous pictures kept there). I myself found it quite exhausting, but still most of the pictures were worth seeing. Works by Botticelli, Michelangelo, Giotto and so on.

Our day ended by taking the train to the countryside and I’ll continue here in my next post, until then, I hope you’re doing good!

For my recommendations, I already said very much and since this is such a long post I`m going to keep it short.

That`s it! I hope you enjoyed!

Join 664 other followers
Follow Sunshine In Wanderland on WordPress.com